As Washington think-tanks, with some notable exceptions, keep churning out papers advising the next American president to double down on containing Iran, the European Parliament adopted a report on October 25 that is strikingly different in tone and substance. Drafted by the UK Labour Party politician Richard Howitt , the motion received overwhelming support in the house: 459 votes in favor, with 174 against and 67 abstentions. It outlines a set of recommendations for the EU and its member states to fully capitalize on the opening provided by the historical nuclear agreement between Iran and the P5+1.

The report praises the Joint Comprehensive Plan of Action (JCPOA) as a success of a multilateral diplomacy, which has already boosted economic and trade connections between Europe and Iran. The report calls on both the EU and Iran to build on this opening by expanding cooperation in counter-terrorism, environmental protection, academic and cultural exchanges, and aviation and maritime safety.

The report is notable also for the respectful and constructive tone it uses. Although by no means short on legitimate criticisms of Iran, it avoids the kind of bashing that can only provoke angry reactions and further alienation. For example, it recognizes the complexities of Iran’s internal politics and does not seek to take sides in Iran’s domestic political debates. It acknowledges the long history of relations between Iran and various European countries as a foundation to further expand ties. Instead of blasting the “repressive theocracy,” it states that “Iran’s revolutionary legacy and constitution as an Islamic Republic” should not be an obstacle to finding common ground on issues of democracy and human rights, where possible. These are novel formulations for an official position of an elected Western body on the Islamic Republic, and convey an intention to have a dialogue of equals.

Despite the overwhelming support the house has given the report, a minority of MPs expressed vocal opposition. Some of the criticisms reflect what rapporteur Richard Howitt called “the lobbying interests” of forces opposed to the nuclear agreement with Iran in the first place: right-wing pro-Israeli organizations, Saudi Arabia, and the exiled Iranian dissident group Mojaheddin-e Khalk (MEK), which was on the EU terror list until 2009 and removed on technicality. The hawkish American Jewish Committee blasted the report for allegedly “giving Iran a free pass on human rights and support for Assad regime,” although it somewhat mitigated its criticisms when the EP adopted the last-minute amendment condemning Iran for its “calls for destruction of Israel and denial of Holocaust.” MEK, meanwhile, managed to convince enough MPs to consider an amendment calling to investigate the 1988 massacres of political prisoners in Iran—a crime indeed, but one that Iranians themselves, and not foreign legislative bodies, are best placed to address. However, the house ultimately rejected this amendment.

A different kind of opposition emerged from the Alliance of Liberals and Democrats (ALDE), traditionally the third pillar of European politics, after Christian democrats and social democrats. Although ALDE does not oppose the nuclear agreement as such, it rejected the report on the basis that it was “weak” on human rights and “has not preconditioned” any improvement of relations with Iran on tangible progress in this area.

These criticisms do not hold water. The report has no fewer than 34 references to human rights in its 51 paragraphs. It contains very detailed, carefully crafted wording on the death penalty and on the rights of women and religious minorities. It also makes a clear appeal to Iran to release all political prisoners. In the process of drafting the report, the rapporteur and his team consulted extensively with credible human rights organizations, such as Human Rights Watch and Amnesty International.

But pre-conditioning any cooperation on specific, unilaterally imposed benchmarks could have easily undermined any prospects for progress, for example, by leading the Iranians to cancel talks with the EU on human rights scheduled for November 9 in Brussels. Crucially, these talks involve the Iranian judiciary, the bastion of the conservatives and the main source of the human rights violations. As Howitt said during the debates on his report, “those who say they support human rights, but would jeopardize our leverage to influence them, should examine their own consciences.”

As to the regional situation, the report is careful not to take sides between Iran and its antagonists, such as Saudi Arabia. The critics would have liked to see a strong condemnation of Iran’s support for the Bashar al-Assad regime in Syria and the removal of clauses that acknowledge the EU and Iran’s common interest in fighting the so-called Islamic State. Instead, the report acknowledges that by following the JCPOA the EU now has increased its leverage over Iran while maintaining ties with Saudi Arabia, Turkey, and other traditional Western allies in the region. The EU is thus in a unique position to play the role of an honest broker in the conflicts ravaging the region, from Syria to Yemen.

Indeed, it is disingenuous for the critics to claim that they support the nuclear agreement while at the same time putting so many conditions to any cooperation with Iran. The irony is that such an approach would not only squander an opportunity to build a new relationship with Iran but also undermine the nuclear deal itself. The JCPOA is not something once achieved and put in the freezer until the regime in Iran changes—which, one suspects, is the real agenda of many of the critics of the report. For the agreement to survive, all sides need incentives to comply, and that requires trust. This process would be so much more difficult to accomplish in the absence of a broader rapprochement.

There are signs that the pragmatic approach espoused by the report works. Contrary to the war of words that usually followed EP resolutions in the past, the Iranian foreign ministry welcomed the report as a positive indication that the EU seeks closer relations with Iran. Of course, the reactions of other factions within the regime are yet to be seen. As the string of totally unacceptable arrests and harassment of dual Western-Iranian nationals shows, influential forces that thrive on confrontation exist in Iran as well as in the West. But ultimately, this is how diplomacy works – by taking patient, reciprocal steps, that strengthen moderates on all sides and eventually lead to the demise of old enmities.

This most recent statement reflects a broader European approach to relations with Iran. Just as the EP was debating the Howitt report, the EU lifted sanctions on Bank Saderat, which, however, remains on the OFAC (US Treasure’s Office of Foreign Assets Control) black list. The EU Commissioner for humanitarian aid and crisis management Christos Stylianides, meanwhile, was in Tehran on the same day committing additional 6 million euros to help Afghan refugees in Iran, bringing the total EU humanitarian support to 12.5 million euros in 2016.

These steps by the EU executive and the parliament reinforce the upward trend in the EU-Iran relations. This rapprochement will enable both sides not only to pursue common interests but also to address problematic issues such as human rights and some aspects of Iran’s regional policies without derailing the relations. Given the investment the EU has already made in these relations, it won’t likely follow the new US president if he or she chooses to heed the advice of hawkish Washington-based think tanks and return to the policy of sanctions and isolation of Iran. And that’s another reason why the next American president would be wise to disregard such advice.

This article reflects the personal views of the author and not necessarily the opinions of the European Parliament.  Photo: Richard Howitt

Tom Cotton Allies Himself with the MEK 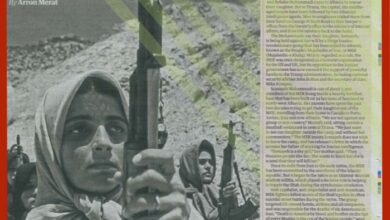