In the sideline of their meeting with Iranian president Mahmoud Ahmadinejad, twelve Iraqi media representatives met the Secretary General of Habilian Association and exchanged opinions with him. 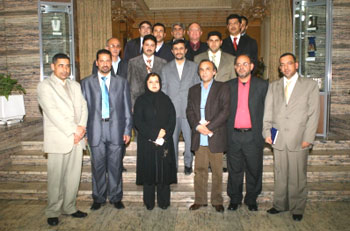 In this meeting, which was attended by different Iraqi newspapers executive editors and the correspondents of Almotamar, Alittehad, Alzaman, Aldorah, Alsabah as well as the correspondents of Iraqi TV channels Alaraqiah, Baghdad, Alforat and Iraq’s national [news] agency, Muhammad Javad Hasheminejad, along with highlighting the role of the media in the current world, said: “We expect our media friends to unveil the unmanifested facts about MKO terrorists so as to make this terrorist cult more and more scandalized in the eyes of Iraqi people. Here I should say that many different methods of brainwashing are applied by the MKO gang leaders inside the cult through which they could attain their wicked ambitions.

My father was martyred by a mere 17-year old teenager who had been under continuous brainwashing for a very long time before he got qualified for committing his crime. This is actually the very same approach they have adopted so skillfully in the case of Somayyeh Muhammadi (member of Rajavi’s cult) in camp Ashraf. At the time that her parents demanded their beloved daughter ‘s exit from the camp, she appeared on Monafeghin TV and begins to curse her parents while calling them bad names. Meanwhile based on the report released by Human Rights Watch, dissident members have encountered very harsh persecution. 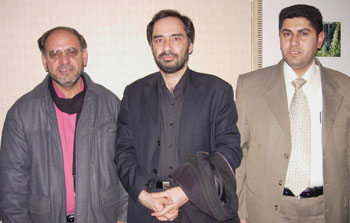 The representative for the families of 16,000 terror martyrs in Iran added : The majority of Ashraf dwellers are those who have been deceived by Rajavi’s cult and have joined him from the neighboring countries as a result of false promises the organization gave them for residence, education, and good jobs; but are now even deprived of the right to exit this camp. The atmosphere in Ashraf is of suffocation and strict censorship. The members don’t even have permission to read newspapers or to access the internet or to enjoy any open news space. The gang leaders know very well that opening any new window to the outside world for the members would result in their finding the contrast between the world they are told of and the realities existing outside the camp. I should also notify you that relocation of the MKO from Iraq would result in a major drop in the number of their forces and this is why they’re struggling to remain in Iraq. We are all aware of their innumerable crimes in Iran and Iraq and as far as they can’t defend the crimes they have committed and their bloody past, they merely deny them. In this meeting Dr. Loei Majid Hassan Albadavi, correspondent to Almotamar newspaper, said: “the Monafeghin have established a new office for propaganda against the Islamic Republic of Iran. They send their agents to every Iraqi media trying to bribe them into publishing articles in favor of the organization. Once they came to me and suggested huge sums for publishing their articles, but I didn’t accept. I assure you that more than 90 percent of Iraqi journalists would undoubtedly demand the MKO be deported from Iraq. I can see new horizons before the two nations because Iran and Iraq are the real victims of terrorism. We also hereby express our readiness to hold exhibitions on the issue of terrorism in Iraq. During the ceremony, Odai Hatam Mahdi Jafari, manager of the organization for protecting Iraqi journalists and a correspondent for Alforat TV, also stated : “I am a victim of MKO persecution too. During the Iraqi people’s 1991 intifada against Saddam, the Monafeghin tortured me in Salam hotel on the order of Saddam. They tortured me in such a cruel way that Ms Simona, governor of Italia’s Human Rights wrote a book about torture and gave my name in her book as the example of one who had been tortured by Monafeghin. Aziz Rahim Zobaidi, manager of Alarabiah TV political news, along with indicating the extensive moral corruption inside camp Ashraf, also said : “we have authorized news on immoral relations in the camp which is publicized by the gang leaders intentionally in order to prevent the members from escaping the camp. We as the representatives of Iraqi mass media demand the annihilation of any terrorism bases in the world.