Hasheminejad : America is supporting mojahedin Khalq which is now for ten years black listed by America itself as terrorist.

A group of Iraq’s Islamic supreme assembly members comprised of Baghdad university professors met with secretary general of Habilian Association. In this meeting along with welcoming his guests, Sayyed Muhammad Javad Hasheminejad said: It would be my pleasure to welcome you here and to hold your presence in Mashhad dear. I should also thank God for granting me the opportunity to be among the Iraqi intellectuals once again. I ‘m so happy that the two nations of Iran and Iraq are approaching each other and I believe that no one could possibly stand against the will of the two nations for friendship and unity. Our enemies have put their backs into growing disunion between us, especially during recent 30 years after the victory of the Islamic Revolution in Iran. Iran and Iraq have many things in common. All of us remember the era of Saddam in power during which the Baath party played the dividing role among different Iraqi peoples and groups and also applied its every means for the establishment of disunion and bloodshed between Iran and Iraq. The party is also responsible for setting up the imposed war against Iran trying to fan the flames of disgust and enmity between the two nations.

Saddam’s regime was up to put an end to the historical relations of Iran and Iraq; but every body witnessed that after the imposed war came to its end and the borders reopened the two nations resumed their relations more eagerly than ever. This was another failure for the colonizers in their efforts to set up chaos and discord between us. People of Iran know it well that the imposed war was the war of America and other big powers against Iran and that Saddam was only a tool in their hands doing whatever he was ordered. America invaded Iraq to replace its agent in the region (Saddam) with a new one; but as the honorable people of Iraq didn’t let them do this, they put their efforts into establishing disunion between the two nations while resorting to the terrorist groups as a result. One of these terrorist groups is MKO which knows Iraq very well and is quite familiar with its intelligence systems and America knows how to use such groups as mercenaries. This organization has committed several crimes in our country and has assassinated based on the international reports 16,000 innocent people in Iran. In the era of Saddam in-power, the organization joined Saddam and its system soon because of having several goals in common with the Baath party. This terrorist cult has also committed many crimes in your country, so we have common concerns and suffer from the same pain. They pretend falsely to be in Iraq because the Iraqi people demand their presence in their country; but if both nations take their steps steadily towards unity, neither Mujahedin nor any one else could possibly divide them. A major problem in your country is the presence of America which not only doesn’t let the Iraqi elected government to expel Mujahedin from Iraq but also support the terrorist cult. America which was supposed by many to have come to Iraq to fight terrorism, is supporting Mujahedin which is now for ten years black listed by America itself as terrorist. America also doesn’t let Iraqi as well as Iranian people to take any measures against Mujahedin.

The truth is that the leading factor in increasing the number of terrors and killings in Iraq is the existence of American backed terrorist groups like MKO in your country. So, what can we conclude from all these? Won’t the first day of peace in Iraq be the last day of American presence in Iraq? Unless we assume that all Arab countries in the Persian Gulf region and the Middle East are Iran’s agents and are waiting for Iran’s orders and are acting so secretly that America’s super complicated intelligence systems are not able to trace them. It’s too far unlikely for a sound mind to believe this. Hasheminejad also added: As an NGO we have hosted more than 30 Iraqi groups. We have hold meetings and talks with many Iraqi officials including the president, prime minister, head of parliament and many different political groups and parties, during which we have always stressed on the two nations’ common concerns and problems and also discussed ad exchanged ideas about the best possible solutions to these problems, while western media have put their backs biasedly into inciting the ruling atmosphere against Iran. I assure you that the security in Iraq would be the security in Iran, the fact which won’t come to existence unless for the efforts of the peoples and officials of the two nations regardless of all the existing biased propagandas.

During the meeting Gholam Reza Behroozi, a former member of MKO terrorist group, gave the attendants a brief description of what had happened for him during his membership in the cult He stated: I had close cooperation with Mujahedin since the early days of Iran after Revolution while being deceived by their widespread false propagandas and promises as a 17 year old boy. I kept on cooperating with them until I joined them in Iraq in 1970 and from that time on I became totally aware of their programs and also their full cooperation with Baath party. Rajavi tried to persuade Saddam to raise another war against Iran only one moth ahead of American-led invasion of Iraq. Rajavi who had very tight cooperation with Saddam’s intelligence system called Istikhbarat, brought saboteurs to Iran so that they commit blind terrors and mortar attacks .This way they intended to make Iran respond them. They had their bases in Basra, Alamarah, Kut, and Jalulah while Istikhbarat provided them with whatever they asked for. Rajavi believed that if we attack Iran so repeatedly to make Iran react, the time would come for Iran to enter an unwanted war with Iraq. He always told us that he had several times advised Saddam during their meetings to impose another war against Iran; but Saddam was no more a powerful dictator. All the time we had military trainings in order to meet the required qualifications for invading Iran. The only question we asked was about when we could attack Iran. But in response Saddam merely said we were just a guerrilla group and that our every attack to Iran would be equal to another defeat like the one we had already experienced in Mersad operation with heavy casualties. In my opinion Americans came to Iraq because Saddam was of no more use to them. Rajavi always told us during the sessions that we had aimed to drag Saddam to another war against Iran. He argued that if America would enter Iraq and Afghanistan, bringing its war ships into the Persian Gulf, then Iran would react seriously. I think another reason America invaded Iraq for was to confine Iran; but as Iran was well aware of the issue turned a blind eye on many of its rights. Now MKO which is in its the most fragile position, can do nothing but merely inviting the people it calls as Iraqi tribes while trying to bribe them into accompanying Mujahedin; but we know that those MKO-called tribes are no more than the leftover baathies from Saddam era who come to Ashraf in the disguise of Iraqi tribes.

Then Dr. Khairollah, a physician and a professor in Baghdad University, said in a speech: We have many common pains and any threat for you would be a threat for us. Remainders of Baathies, Vahhabies, Alqaida, MKO and many other terrorist groups are the pledged enemies of Iraqi nation. Iraqi people wish for an Iraq full of peace and prosperity and I know it well that our brothers in Iran have the same wish. 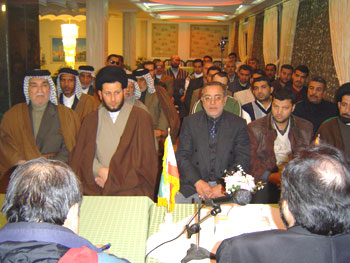 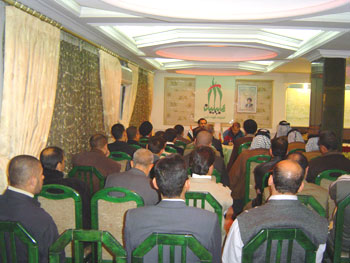 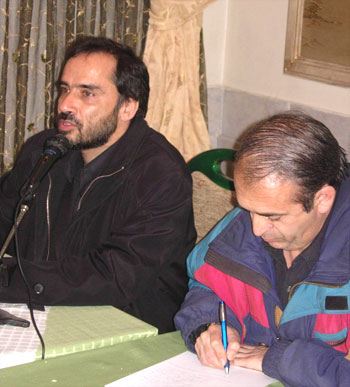 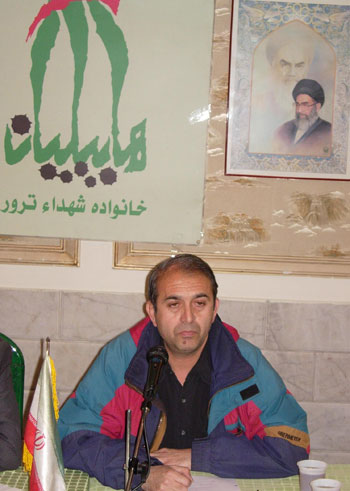