Following the disastrous earthquake in Haiti, Maryam Rajavi, self-assigned president of National Council of Resistance, offered her condolences to the people of Haiti. The message included a further command for MKO members which were to make use of the opportunity for fundraising activities for the organization. 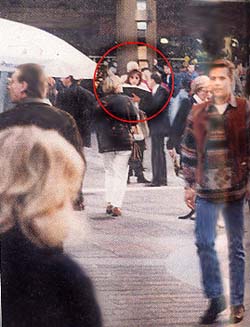 Just a few days after Haiti disaster Swedish government published a list of institutes that had been considered as fraudulent because they lack the special account number the government had allocated to charity organizations.

The terrorist cult of MKO has a dark background of fraudulent fundraising campaign and money laundry. In 1998 the charity Commission of Britain closed the Iran Aid Charity Association because it could not prove that the funds were being used for the purpose for which they were raised.

The Bam earthquake charity event held in January 2005 demonstrated how MKO use their front organizations to raise funds for their own and their cause not for the poor survivors of the disaster. On January 26, 2005, the Iranian – American Community of Northern Virginia hosted a charity event in Washington DC to allegedly raise money for the survivors of Bam disaster, to support the so-called Iranian Resistance. Anyone to attend the event was supposed to charge 35$. Of the 23 organizations listed as sponsors of the event,17 are known MKO front groups or linked to prominent MKO members or activities, according to Sam Dealay who wrote in an article titled “Terrorists plan DC fundraiser”, on Jan.21,2005.

FBI agents were present at the event and two days after the event was held, the Treasury Department froze the assets of the Iranian-American Community of Northern Virginia, said Glenn Kessler in Washington Post on January 29th, 2005.

In May, 2009, Los Angeles Times published a report on an appeal court held to try seven MKO members who were guilty to raising funds for the group. In court the defendants admitted that they knowingly raised funds to support the activities of Mujahedin-e-Khalq, or MEK, by collecting money from MEK supporters and soliciting money from unwitting donors at public locations, including the airport, the report read. Donors were told they were supporting a charity called the Committee for Human Rights. The fundraising activities took place from 1997 to February 2001, the report quoted the authorities.

Working in groups and under the cover of humanitarian organizations and charity institutions they published some pictures of war-worn, orphan and homeless children to encourage people to help them. This invoked the reaction of security forces of France. In an effort to fight against money laundry, Maryam Rajavi was arrested along with some other officials of the group in June 2003.

In the fall of 2008, Reuters reported that about ten members of “a banned Iranian opposition group were arrested in France and Switzerland in connection with a money-laundry investigation”

Money laundry is a customary operational technique among criminal gangs and terrorist organizations. Using charity institutes they solicit people to donate funds. This way they could raise large sums of money. In June 2003, when the French Police attacked Mujahedin’s headquarters in Ouver Sur d’Oise ,Paris, they discovered about nine million dollars which were found in the MKO offices that were “operational, organizational and logistic bases for collecting suspicious money” said Jean Louis Bruguière, French antiterrorism judge, in charge of MKO file.