A number of sources in US intelligence community revealed that some information revealed by the Mujahideen-e Khalq, particularly on Iranian nuclear activities, has been wrong. This is exactly what has seen reflected in the IAEA’s recent reports.

As the debate heated on Iran’s Nuclear program and Tehran-Washington ties worsened, the MKO leaders tried to flatter US officials in order to convince them that they have important information from inside the Iranian regime and that this information proves that Tehran has been enriching uranium in a wide range. This brought new discussion to the White House on the issue of support for this group and its possible role in applying US policies against Iran.

The Bush administration sees itself now in a situation similar to that of pre-Iraq war. At that time Ahmed Chalabi, the head of Iraq National Congress, had close relations with senior officials in the US, such as Richard Perle and Paul Wolfowitz. He had convinced them that Saddam Hussein’s regime possessed weapons of mass destruction and that Iraqi people would receive US liberators warmly.

Today, Maryam Rajavi, so-called president-elect of the NCRI, wants to repeat the scenario again by repeating this claim that “Mujahideen-e Khalq is ready to give urgent valid information on nuclear activities of Iran to Washington.”

Some White House officials believe that the MKO is able to serve the goals of Americans and that it is an opposition group with thousands of militants with many supporters.

These officials say that the MKO has proved its ability in giving information with revealing Iranian nuke sites in Natanz and Arak. They ask for the removal of MKO’s name from terror lists and stress that the members of this organization would give necessary information to the US and besides, they can play an important role in disrupting the order in the Iranian government with their supporters.

It should be noted that the MKO was added to the US terror list in 1997 by the State Department. This decision emphasizes that the MKO was involved in attacks on Americans, including the kidnapping of US ambassador to Iran in 1971, bombings of 1972 in US companies in Iran such as Pepsi Cola, General Motors and Marin Oil. They were also involved in robbing 6 banks, assassinating Colonel Lewis Hawkins, and attacking US and British airways offices and the Israeli company of Alal.

During his military trial in 1972, Massoud Rajavi, the head of the MKO, confessed to the violent operations of himself and his organization. he believes that the future of Iran should be determined by armed resistance and that political forces can’t bring changes to the fate of this country. He had accused the US of being the major reason behind all problems of the world. He called it Iran’s main enemy because the US was behind coup against Mosaddeq.

Those who oppose the MKO and removing its name from terror list have numerous historical evidences to prove that this organization is full violence. Some people try to ignore the violence and ideological differences in the organization.

MKO, with its Marxist ideas and anti-democratic theories, has tried in recent years to appear as a pro-democratic organization beside all other Iranian opposition groups. They pretend to defend the rights of women and minorities as well as democratic rights. The head of the group, Massoud Rajavi, has elected his wife Maryam as the president of National Council of Resistance (NCRI).

This organization suffers from its past and its violent operations. The Iranian people never forget these issues.

This is not true to think that the US, by supporting the MKO, would improve its position as opponent of the Iranian regime among Iranians. Cooperating with the MKO will never allow the US to become closer to the Iranians.

Now the question is: Didn’t the US take lessons from Iraq? Is the Bush administration going to repeat its mistake? 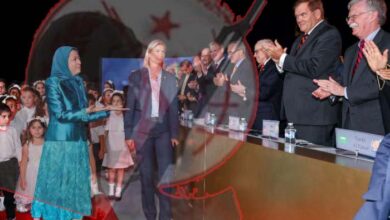