Lebanese cleric Allameh Sayed Mohamad Ali El Husseini had acted as the chief advisor to Maryam Rajavi on Islamic and Arabic issues. He participated in many events and meetings with Rajavi and she heaped praise on him for many years.

This week he came to Paris to take part in Islamic Scholars Against Terrorism week. While in Paris he met with a group of former MEK members and announced that he is no longer working for Rajavi and the MEK. He explained that as a cleric who believes in peace and harmony throughout the world the MEK deceived him into giving them his support. 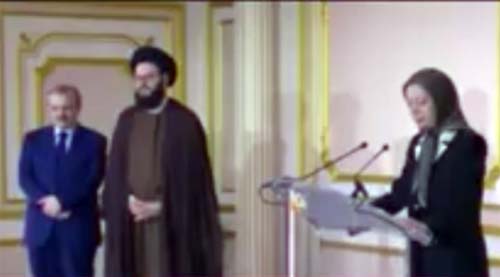 He said now he has talked with people outside the MEK they have made it clear how he was fooled.

“I now see that the way the MEK act is not compatible with human rights or Islam. So, I went back and questioned them. I started with basic beliefs. I asked, ‘if you are Muslim why don’t you pray?’ They said ‘it is not important because the leadership is in charge of our sins’. Then I asked, ‘these things you did against your own members that made them leave you, what explanation do you have?’ They told me ‘they are all agents of the Iranian regime and you shouldn’t have been talking with them’. After this I realised they don’t want to explain themselves and are just evading my questions.”

The same day that El Husseini spoke out, the MEK quickly issued a long statement by the National Council of Resistance of Iran (NCRI) in Farsi and Arabic (because he didn’t say anything in English), swearing at him and saying, ‘he is an agent of the regime but we already knew that’. At same time, the MEK deleted every trace of his connection to them on their websites. Still they couldn’t erase quotes from him and the MEK in media like Al Arabiya and elsewhere.

After this issue was made public, many former MEK, including those in Albania, issued a joint statement of support for him. Some wrote open letters to Rajavi mocking her, saying ‘this trick that everyone is a saint while with you and when they leave they are an agent of regime doesn’t hold water, especially when you claim you already knew. Can you tell us now who the next agent is that you know about before they leave?’