“Iran: A Victim of Terrorism”exhibition was held by Habilian Association (families of 16000 Iranian terror victims) in Pakdasht, 25 km southeast of Tehran. Highly welcomed by the visitors, the exhibition was held in order for various groups of people to become familiar with the background and crimes of the Mujahedin-e Khalq Organization (MKO). 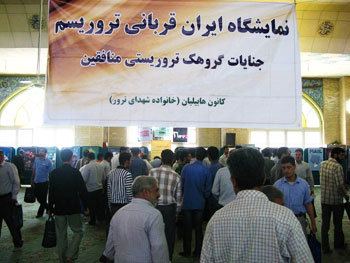 Held at a request by a number of terror martyrs’ families in Pakdasht, the exhibition showed various dimensions of the MKO crimes against the Iranian nation. New and shocking dimensions of MKO’s crimes including their pre-evolution team houses, using sex attraction to make students join the cult, Rajavi’s cooperation with Shah regime to save his own life, intra-MKO clashes to elect a leader, exploring Rajavi’s personality, MKO’s shameful uprising in June 20, 1981, MKO’s mortal attacks on Iran’s president, prime minister and more than 70 senior officials in 1981, their treasons during the Iran-Iraq war, MKO’s contributions to Iraqi Shiite and Kurd massacres by Saddam Hussein, their treasons regarding Iran’s peaceful nuclear program and their current parasite stay at Iraq’s Camp Ashraf were on show. 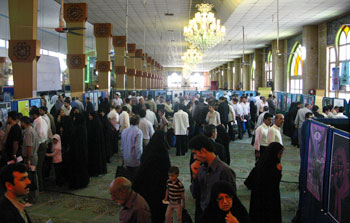 The exhibition held separately at the office of Pakdasht Friday prayer leader and the Friday prayer area was highly welcomed by Hawza and university students as well as more than 3200 people of various groups, including the city officials such as the governor and chief of the police.

The following are only few of the visitors’ positive comments who talked to the Habilian website on the exhibition:

•This is my first time to visit such a detailed exhibition. I didn’t know about many of the MKO’s inhuman behaviour. I’m happy that I’ve immunized myself against their eclectic beliefs.

•I hope the exhibition will be on show in many other cities, villages and universities in order to inform people about the MKO’s crimes.

•I am an Iran’s temporary history researcher, with parts of my study on cults including the MKO. The cult is moving into decline and misery from the very beginning. I provide my students with detailed information on the MKO as a cult. I do believe that the trend involved in Iran’s post-election clashes is consisted of a few people whose motive is self-aggrandizement, though the MKO claim it is motivated by them. However, the problem is that the MKO is really neglected in Iran.

•I knew something about the MKO’s deceiving propaganda before. I do know that they are trying to show themselves still alive. They have no Islamic beliefs and sympathy for Iranian nation.

•It’s very funny for me that despite of all their treason against Iranian nation, the MKO still claims to love and be benevolent to Iranian nation. The MKO’s treasons during the Iran-Iraq war are not forgotten yet.

Cultic backlash against a legal intervention